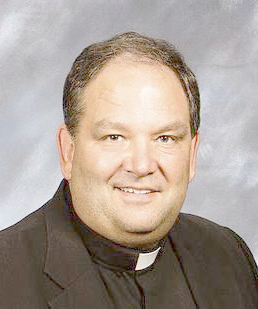 The son of Bernard and Helen Clark Hebda, Bishop Hebda was born on September 3, 1959 in Pittsburgh, PA, and is the brother of Yvonne Hebda, Patrick (Bernice) Hebda and Terrence (Rene) Hebda. His parents and siblings currently reside in Sarasota, Florida.

Bishop Hebda attended Resurrection Elementary School in Brookline, PA, and then graduated from South Hills Catholic High School in Pittsburgh in 1977. He continued his education at Harvard University in Cambridge, MA, receiving a Bachelor of Arts degree in 1980 followed by a juris doctor degree from the Columbia University School of Law in 1983. He was admitted to the Bar of the Commonwealth of Pennsylvania in 1983 and worked as an associate in the law firm of Reed, Smith, Shaw and McClay.

In 1984, Bishop Hebda enrolled at St. Paul Seminary in Pittsburgh and pursued the required studies in philosophy at Duquesne University before being sent to North American College in Rome in 1985 where he completed his theological studies and earned his S.T.B. from the Pontifical Gregorian University in 1989.

Bishop Hebda was ordained a deacon on April 6, 1989 at St. Peters Basilica in Rome by Archbishop John Quinn, and was ordained to the priesthood by Bishop Donald W. Wuerl on July 1, 1989 in St. Paul Cathedral in Pittsburgh. After his ordination, he briefly served as Parochial Vicar Pro Tem at Purification of the Blessed Virgin Mary Parish in Elwood City, PA, before returning to Rome to complete his licentiate in canon law which he received in 1991 from the Pontifical Gregorian University.

Upon returning to Pittsburgh, Bishop Hebda served in the bishops office as Master of Ceremonies from 1990-1992, in team ministry at Prince of Peace Parish on Pittsburghs South Side from 1992-1995, and as director of campus ministry at the Slippery Rock University Newman Center from 1995-1996. He also served on the Canonical Advisory Council, the Priest Council and the Priest Personnel Board.

In 1996, Bishop Hebda was appointed to work in the Pontifical Council for Legislative Texts in Rome which is responsible for the interpretation of the Churchs laws, especially the Code of Canon Law. In 2003, he became the Under-secretary of the Council.

While in Rome Bishop Hebda also served as an adjunct spiritual director at North American College and as a confessor for the postulants of the Missionaries of Charity (founded by Mother Teresa) and for the Sisters of that community working at a home for unwed mothers.

He was named the Fourth Bishop of the Diocese of Gaylord on October 7, 2009 by Pope Benedict XVI. His Episcopal ordination and installation took place on December 1, 2009. Archbishop Allen H. Vigneron was the Principal Consecrator, with Archbishop Francesco Coccopalmerio and Bishop Patrick R. Cooney as co-conscrators.