The current St. Mary Cathedral was built in 1975 and dedicated on July 25, 1976, which coincided with the fifth anniversary of the establishment of the diocese. The cathedral church is the symbol of the "Mother Church" for the entire Diocese of Gaylord. It is home to the family of God of northern Michigan.

Take a walk with us through our Cathedral. Tour One, Tour Two, Tour Three and Tour Four.

The Church of St. Mary of Mt. Carmel

Built in 1900-01, it served as the first cathedral from 1971, when the diocese was formed, until 1976 when the current cathedral was dedicated. 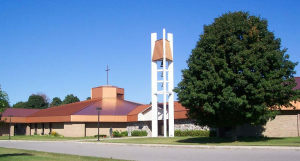 Built in 1975 by the first bishop of Gaylord, Edmund C. Szoka, it is dedicated to St. Mary, Our Lady of Mt. Carmel. 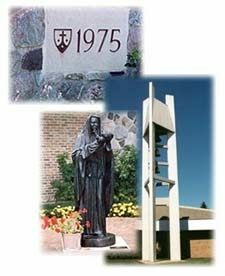 Laid on July 25, 1975. Among the items sealed inside are two Holy Year medals, one bearing the likeness of Pope Paul VI, and two medals of Our Lady of Mt. Carmel. The bell tower was consecrated in July 1977. The inscription on the largest bell reads, "Bell of the Cathedral Church, Our Lady of Mount Carmel, Diocese of Gaylord, Consecrated 1977 by The Most Reverend Edmund C. Szoka, First Bishop of Gaylord." The statue of Mary at the south entrance was designed by Jim Hopfensperger of Midland. It is cast in bronze and is one of a kind. It was added to the cathedral grounds in 1991. 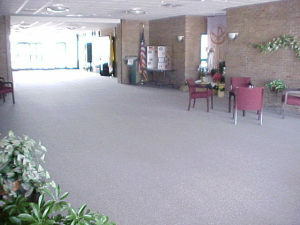 The gathering space leads to the body of the cathedral. The etchings above the entrance depict Mary bestowing the Scapular upon St. Simon Stock and Elijah confronting the prophets of Baal. These symbols were etched and guilded with gold leaf. Below the etchings are the ambri containing the oil of the catechumens and the sacred chrism, both connected with initiation and placed proximal to the baptismal font. 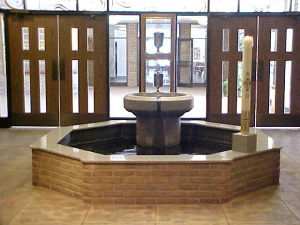 The Baptismal Font is at the entrance to the body of the cathedral, where our lives as disciples of Christ begin. The shape of the font is the same as the church building itself, an octagon. The immersion pool is entered from the side and exited toward the altar. The font, altar and cathedra are aligned.

Inside this cube of Vermont granite are the relics of Matthew, Mark and Luke, a piece of John's house, as well as pieces of bone from other saints. The idea of housing relics inside the altar harkens back to the days when early Christians gathered in the catacombs, praying in the company of their ancestors. 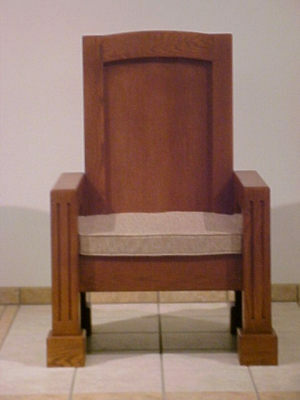 This is where the bishop sits when he presides at liturgy. Occupied or not, it is the symbol of his office and authority. 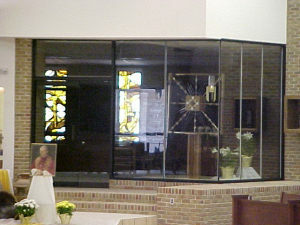 The tabernacle has the general shape of a monstrance with a luna suspended in a sunburst where the reserved Eucharist is held. It is used for taking communion to the sick (viaticum) and for occasional veneration. To the right of the tabernacle is the reconciliation room. The oil of the sick is placed between the tabernacle and the reconciliation room as a symbol of healing, the healing which comes from the Eucharist taken to the sick and the healing, of the Sacrament of Penance. 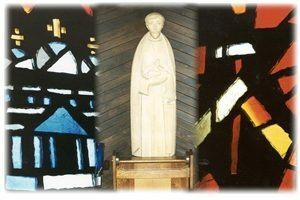 Included are shrines to the Sacred Heart, St. Joseph, the Blessed Virgin (appellation of Our Lady of Czestochowa) and Bishop Baraga (the "Snowshoe Priest"). The shrine of St. Joseph includes a central figure flanked by windows made of faceted glass symbolizing both Joseph's occupation as carpenter (hammer and square) and his role as patron of the universal church (basilica). 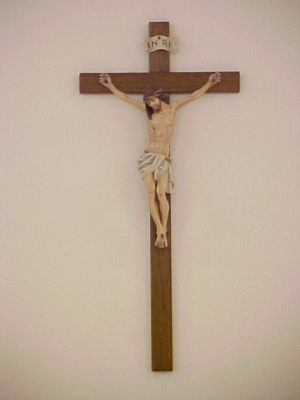 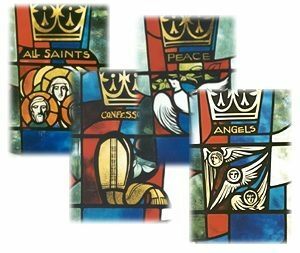 Surrounding the outer area of the body of the cathedral list titles taken from the Litany of the Blessed Mother, such as Queen of Saints, Queen of Confessors, Queen of Peace, Queen of Angels.

The Stations of the Cross 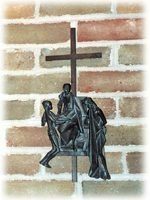 Sculpted bronze figures with wooden crosses placed around the perimeter of the nave walls. 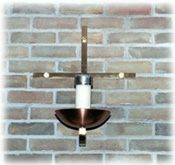 These mark the four geographical points of the Church (north, south, east and west). These areas were annointed with chrism at the time of the dedication.

Hand-built in London, Ontario by Gabriel Kney Company, with the pipes being manufactured in Gottingen, Germany. It took a five-man crew a week to install and another ten weeks to voice the more than 2000 pipes. The organ has 30 stops and originally cost over $100,000.

The Chapel of the Blessed Sacrament 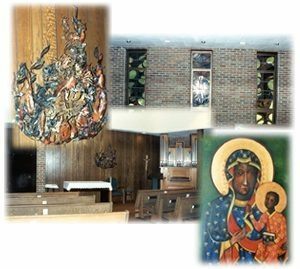 The icon behind the altar is called The Burning Bush and was sculpted from copper by Vera Bartnik of Traverse City. The apertures symbolize mouths because this is the bush that spoke to Moses and gave him the courage to come down from the mountain to face the Israelites. The shrine of Our Lady of Czestochowa, on the outer wall of the Chapel is a copy of an icon from a Polish monastery thought to be painted by St. Luke. The windows of the chapel differ from those of the main cathedral in that instead of being predominantly blue, they are the color of wheat, symbolizing "the blessed sacrament." The Chapel seats approximately 100.

The Body of the Church 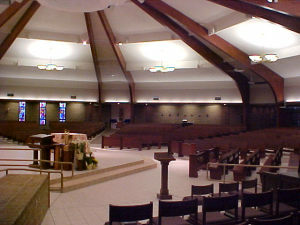 The body of the church houses the Body of Christ, the assembly. The pews are arranged in a semi-circle and in such a way so that no member is more than 12 rows from the middle of the sanctuary. The seating capacity is approximately 1000.